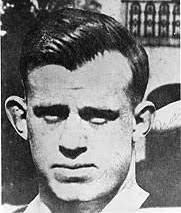 “Bully” Van de Graaff played football for the University of Alabama from 1912-1915. A star punter, kicker, and tackle, he became Alabama’s first All-American in 1915. He attended West Point and after serving in World War I, he coached for Xen Scott and Wallace Wade. From 1926-1939 he was the head coach at Colorado College. He went on to a distinguished Army career and retired as a colonel.