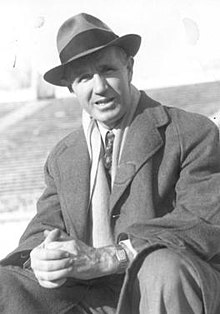 Wallace Wade attended Brown University where he was a member of the football team and played in the 1916 Rose Bowl. He began his college coaching career at Vanderbilt in 1921 before taking the head coaching job at the University of Alabama in 1923. During his eight seasons in Tuscaloosa, the Crimson Tide won four Southern Conference Championships, three National Championships, and competed in three Rose Bowls; winning two and tying in one. During this period, Coach Wade brought significant attention to the power of Southern football. Following his time at Alabama, Wade coached at Duke from 1931-1950 with a four-year gap during World War II. He finished his football coaching career with a record of 171-49-10 and served as Southern Conference Commissioner from 1951-1960. He is enshrined in the National Football Hall of Fame.