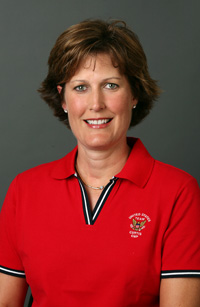 Grimes won the 1980 Alabama State Women’s Junior Championship and went on to play golf at Auburn from 1985-86. She coached the Auburn Women’s Golf Team from 1991-94. She has won the Alabama Women’s State Amateur five times, the USGA Women’s Mid-Amateur and the South/Atlantic Amateur in 1998, and the Women’s Southern Amateur twice. She played on the United States Curtis Cup Team in 1998 and 2000. In 2002, she was inducted into the Tiger Trail of Auburn. The Virginia Derby Grimes Scholarship Classic and Auburn Tiger Derby Invitational are named in her honor.