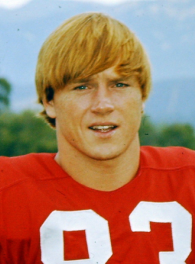 After an outstanding high school career at Robert E. Lee High School, he became Pat Sullivan’s go-to receiver at Auburn University. Beasley was a consensus All-American in 1970-1971. Every fifth pass caught by Beasley was a touchdown. He was the first receiver picked in the 1972 NFL Draft; he went in the first round to the San Francisco 49ers. Injuries limited Beasley’s pro career to four years. He was inducted into the College Football Hall of Fame in 2002.