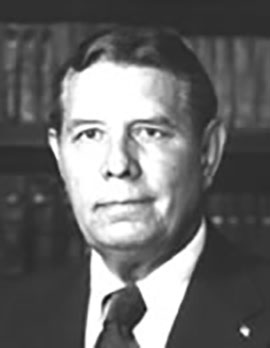 A multi-sport athlete at Auburn University, Ralph “Shug” Jordan played football, baseball, and basketball. After graduation in 1932, he stayed on with the Auburn football coaching staff until World War II interrupted. He reached the rank of major during the war and was one of the few men who took part in four invasions – Northern Africa, Sicily, Normandy, and Okinawa. Following the war, he coached for the Miami Seahawks and the University of Georgia. In 1951, he returned to his alma mater as head football coach. His head coaching record at Auburn was 175–83–7. The Tigers won the National Championship in 1957 and went to 12 bowls before he retired in 1975. Shug produced 20 All-Americans and coached Heisman Trophy winner Pat Sullivan and Outland Trophy winner Zeke Smith.