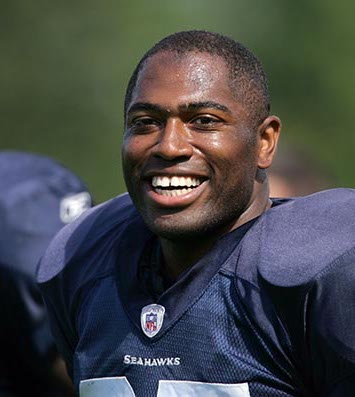 Shaun Alexander played collegiately at the University of Alabama. He was an All-American and a consensus All-SEC running back in 1999. He was named the SEC Player of the Year and earned Academic All-SEC honors in 1999. He played for the Seattle Seahawks from 2000-2007. He was a Pro Bowl selection three consecutive years (2003-2005). He was the AP NFL Most Valuable Player in 2005. That year, he led the NFL in rushing yards (1,880) and rushing touchdowns (28); and he became the first running back in NFL history to record fifteen or more touchdowns in five consecutive seasons. He was named to the NFL 2000’s All-Decade Team.