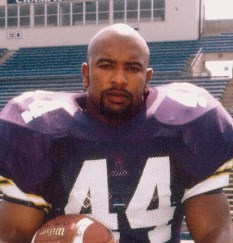 Ronald McKinnon played collegiately at the University of North Alabama from 1992-1995. From 1993-95 he led the University of North Alabama to three straight Division II National Championships. He was a three-time consensus First Team All-American and a four-time First Team All-Gulf South Conference pick. In 1995, he became the first defensive player to ever win the Harlon Hill Trophy (Division II equivalent of the Heisman Trophy). He was named the Conference Player of Quarter Century (1971-‘95). He played ten years in the NFL, nine as a starter for the Arizona Cardinals and finished his career with the New Orleans Saints. He was inducted into the College Football Hall of Fame in 2008.