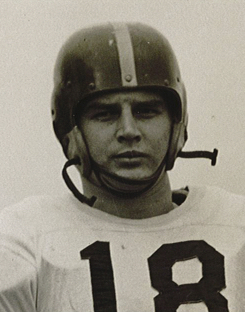 Bobby Tom Jenkins was All-State and All-Southern in high school. “Trigger Tom” played halfback at the University of Alabama in 1942. In 1943 he transferred to the U.S. Naval Academy where he played until 1945. He was named a consensus First Team All-American in 1944; the other members of the consensus First Team All-American backfield were Les Horvath, Doc Blanchard, and Glen Davis, who all won the Heisman Trophy. In 1945, Jenkins’ football career was ended by a knee injury. He retired from the Navy in 1950 and was a successful businessman and civic leader in Birmingham.