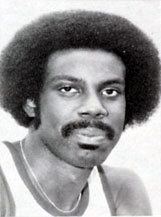 King is the University of Alabama’s all-time leading scorer with 2,168 points and the third on the list for rebounds with 1,279. He led the SEC in rebounds per game with 13.3 per game in 1978. From 1977-79, he was Alabama’s leading scorer. He was named SEC Player of the Year as a freshman and sophomore and was named SEC Athlete of the Year in 1979. He was named All-SEC for three consecutive years and All-American two years. In the 1979 NBA Draft, he was the 18th overall pick, selected by the Kansas City Kings. He played four years with the Kings and two years with the Seattle Supersonics.