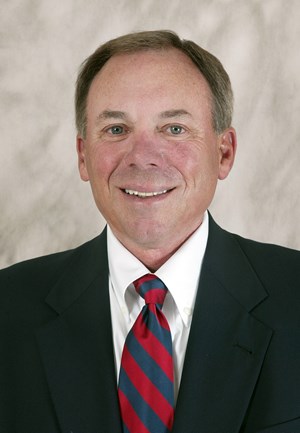 Pat Sullivan attended John Carroll High School before starting at Auburn University in 1968. During his career at Auburn, he led the Tigers to a record of 26-7 with bids to the Bluebonnet, Gator and Sugar Bowls. He was consensus All-American. In 1971 he won the Heisman Trophy, awarded to the nation’s best college football player each year. He went on to play quarterback three years for the Atlanta Falcons. In 1986, he returned to Auburn to coach quarterbacks. He served as the head football coach at Texas Christian University from 1992-97. In 1994 he was selected as the Southwest Conference Coach of the Year. In his coaching career he has won two conference titles, one with TCU and one with Samford. Auburn retired the No. 7 in his honor. Sullivan was inducted into the College Football Hall of Fame in 1991.