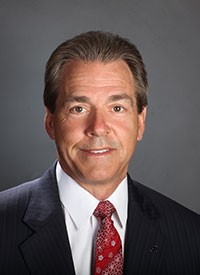 Nick Saban played collegiately at Kent State University. As a head coach, he has won five national championships at the University of Alabama and one in 2003 while at LSU. He and Coach Paul “Bear” Bryant are the only coaches to win an SEC Championship at two different schools. Coach Saban was the first to win a national championship at two different Division-I FBS schools. Before coming to Alabama, he had head coaching stints at Toledo, Michigan State, LSU and with the Miami Dolphins. He has won numerous national coach of the year awards including the A.P. National Coach of the Year, Paul “Bear” Bryant Award, FWAA/Eddie Robinson Award, Walter Camp Football Foundation, and the Bobby Bowden National Coach of the Year.