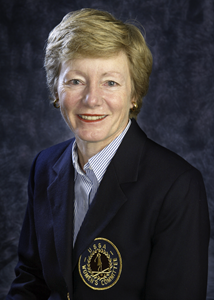 Lang played collegiately at the University of Alabama, where she earned All-American honors. She won the Alabama State Junior Championship in consecutive years from 1967-1970 and the Alabama State Amateur Championship in 1973. In 1974 and 1980, Lang won the Women’s Southern Golf Championship. Other wins include the U.S. Women’s Mid-Amateur and the Women’s Southern Senior Amateur Championship. Her career wins total 15 amateur titles in four different states. Lang was a member of the United States Women’s Curtis Cup Team in 1992 and she captained the team in 1996. In 2015, she became one of two American women to be invited to join the Royal and Ancient Golf Club of St. Andrews. She has served on USGA Executive Committee.