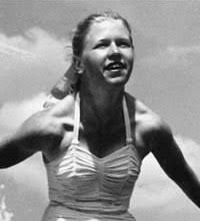 Leah Atkins was Alabama’s first Water Skiing World Champion. She dominated the sport from 1951 to 1958. At age 16, her first year competing, she won first place overall at the Ontario Championships in South Hampton, Canada. In 1953, she won the Water Skiing World Championship in Toronto. She went on to establish records and win championships, both nationally and internationally. Atkins earned her masters and doctorate degrees from Auburn University and was the first woman to be inducted into the Alabama Sports Hall of Fame.