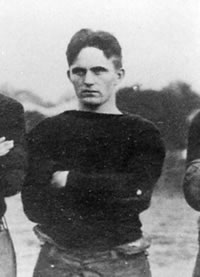 An outstanding all-around athlete at Auburn University, he lettered four years in football and baseball and one year in basketball, track, and soccer. During his four years, the football team’s record was 24-4-2 and outscored opponents 639-111. He was captain of the 1913 undefeated Southern Champions gaining 1,707 yards, forty-four percent of the team’s total. Throughout his career, he gained 5,800 yards rushing, 350 passing, and 1,200 in punt returns. Selected All-Southern, he is listed on Auburn’s All-Time Team. He coached football at Auburn from 1914-1916 and 1922-1925. He organized and built the first golf course in Auburn. During WWI, he was awarded the Distinguished Service Award for heroism.