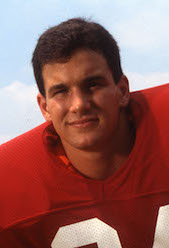 Kevin Turner played collegiately at the University of Alabama and served as captain for the 1991 team. He received the Sylvester Croom Commitment to Excellence Spring Practice Award in 1990. Regarded as a strong blocker, he also rushed for 4.7 yards per carry and had 95 receptions. He was a third-round draft choice in the 1992 NFL Draft to the New England Patriots. He played three seasons with Patriots and then was traded to the Philadelphia Eagles, where he played five seasons. He finished his NFL career with 635 rushing yards (4.0 yards per carry), 236 receptions for 2,015 yards, and 11 touchdowns. He was presented the NFL Ed Block Courage Award in 1996 by the Eagles for overcoming adversity on and off the field. He passed away on March 24, 2016 due to ALS.