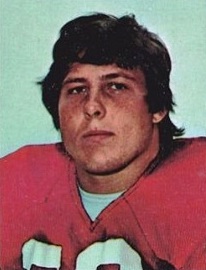 John Hannah was a three-sport letterman at Alabama: SEC Champion Wrestler, SEC record holder in the shot and discus, and two time All-American football player. Coach Paul Bryant described him as “The finest offensive lineman I’ve ever been around.” Winner of the coveted Jacobs Blocking Trophy, he was drafted first by New England in 1973, and enjoyed 13 outstanding seasons with the Patriots. He played in 183 regular season games and was chosen to play in the Pro Bowl nine times, formerly second on the National Football League’s All-Time list. Selected for the All-NFL 25-year team (1960-84) by the Pro Football Hall of Fame. Sports Illustrated has described him as the best offensive lineman in the history of professional football. In 1999, he was inducted into the College Football Hall of Fame.