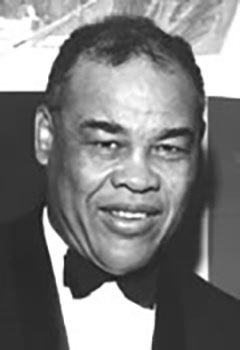 Joseph Louis Barrow would come to be known as Joe Louis and reign as the World Heavyweight Boxing Champion from 1937 to 1949. On June 22, 1937 he knocked out Jim Braddock to claim the World Heavyweight Title. Louis would hold the title for the next 140 months, the longest reign in the history of any weight division. His career was briefly put on hold to serve in the U.S. Army from 1942 to 1945. Louis’ Army unit included fellow athlete, Jackie Robinson. During his boxing career he successfully defended his title 25 times. He retired in 1949 with 66 wins and 3 losses. Of his 66 wins, 54 were knockouts, giving him a 75% KO rate. Louis is widely considered to be one of the greatest heavyweight boxers of all time.