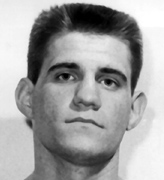 The outstanding basketball player played collegiately at the University of Alabama, leading the Tide’s famous “Rocket 8 Team” (1955-56). He still holds several Crimson Tide records. He was the first Tide player to average better than 20 points per game for his career. In four seasons, he made 694 field goals and 433 free throws for 1,861 points and a 20.1 average and became the first Tide player to lead the team in scoring for four years. He averaged 23.2 points per game for all SEC games. In 1956, he averaged 21.5 rebounds per game and in four years had 1,688 rebounds for an average of 18.1 per game. He was twice an All-American.