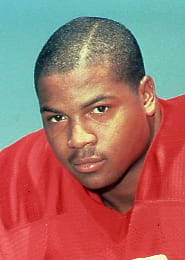 Jeff Herrod played collegiately at the University of Mississippi. He holds the single game total for tackles (28) and the single season total for tackles (168). He finished as the all-time leader in tackles at Ole Miss with 528. He was First Team All-SEC, Second Team Associated Press, and Third Team All-American. Played 11 years in the NFL (10 with Indianapolis Colts and one year with Philadelphia Eagles). He led the Colts in tackles for seven seasons. He finished as the Colts All-Time Leader in Tackles with 1,347. He was named Defensive Player of Year three times (1989, 1990, and 1992). The Colts named him their MVP in 1991. In 1998, he received the prestigious NFL Ed Block Courage Award from the Colts for overcoming adversity on and off the field. In 1993, he was selected as member of the Ole Miss Team of the Century.