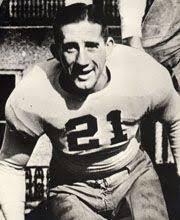 Rast played end for the University of Alabama from 1937 to 1942. He was a unanimous All-American pick in 1941 and was also selected MVP of the 1942 Cotton Bowl. He was in the U.S. Army from 1942 to 1946 and was twice wounded. He received the Purple Heart with oak leaf cluster, Bronze Star, and Silver Star. As an Alabama State Representative, he assisted in developing the Alabama Sports Hall of Fame. In 1994, Rast was selected by the Southeastern Conference as an SEC Football Legend.