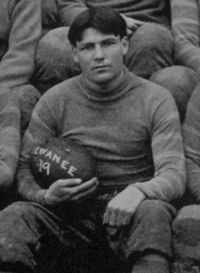 Seibels is most recognized for playing on the undefeated Sewanee “Iron Men” team of 1899. He was chosen captain by Coach Herman “Billy” Suter. In six days, Sewanee defeated five teams and scored 91 points and allowing none. They had victories over Texas, Texas A&M, Tulane, LSU, and Ole Miss. Seibels was the highlight of each game by leading his team in touchdowns, rushing and punting. Other teams they defeated were Georgia, Georgia Tech, Tennessee, Auburn and North Carolina. Seibels went on to play four years of baseball as a third baseman and pitcher and was offered a pro contract. He was also a talented golfer and won a state golf championship. Seibels founded a major insurance company in Birmingham and was inducted into the College Football Hall of Fame in 1973.