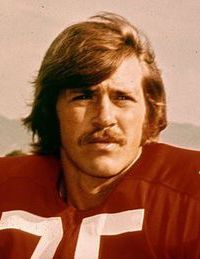 Forrest Blue Jr. played collegiately at Auburn University. He started as a defensive tackle before moving to center. He was named All-American his senior year and was captain of the team that year. He was a first-round draft choice of the San Francisco 49ers in 1968. He played seven seasons with the 49ers and is regarded as one of their top centers in team history. He was named First Team All-Pro in 1971 and 1972; and he played in four consecutive Pro Bowls. He helped lead the 49ers to three straight divisional titles in the 1970s. He ended his career with the Baltimore Colts playing four seasons.