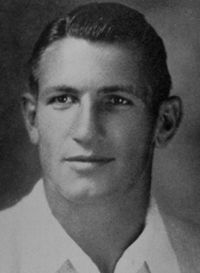 “Dixie” Howell was a triple-threat back at the University of Alabama from 1932-1934. He was twice named to the All-SEC team and in 1934 was named a consensus All-American as one of the nation’s top punters. As a member of the 1935 Rose Bowl team, he threw two touchdown passes and ran for two more, leading the Crimson Tide to victory over Stanford and earning himself a place on the Rose Bowl All-Time Team. While at Alabama he also played baseball and following graduation he briefly pursued a professional baseball and football career. Howell coached baseball and football until the late 1950s. He is also enshrined in the College Football Hall of Fame.