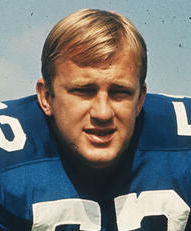 Dave Edwards was an outstanding two-way player at end for Auburn University during the 1959-61 seasons. At 198 pounds and with great speed, he was considered one of the premier defensive players in the Southeastern Conference. Joining the Dallas Cowboys in 1963, he was converted to an outside linebacker. Here with his quickness and aggressiveness, he became a very valuable member of the famous “Doomsday Defense” and was annually around the top of the list of pass-interception leaders among linebackers. He starred for the Cowboys for 12 seasons during Dallas’ glory years. Edwards played on three conference championship teams and participated in three Super Bowls winning the title in 1971, Super Bowl VI, when Dallas beat Miami 24-3.