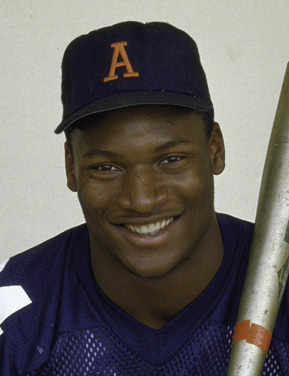 At McAdory High School he was a three-sport, All-State performer. He received an athletic scholarship to Auburn University in 1982 where he played football and baseball. As a football player, he was three-time All-SEC and two-time consensus All-American. In 1985, he received the highest honor in college football, the Heisman Trophy. Drafted in both the NFL and Major League Baseball, he signed to play baseball for the Kansas City Royals. In 1987, he also signed with the Los Angeles Raiders and became a two-sport star. In 1989, he was MVP of the MLB All-Star Game and in 1990 he was an NFL Pro Bowl selection. An injury cut short an outstanding athletic career. He is the only professional athlete in history to be named an All-Star in both baseball and football, and one of a few to do so in two major sports.