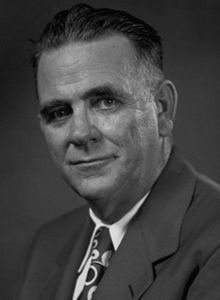 Moore played football and baseball for Carson-Newman College before beginning a lifelong career in athletics that included coaching football, baseball, basketball, and track. He coached at Sewanee (1924-26) and Mercer (1926-28) before moving to Louisiana State University where he coached from 1929 to 1947. As football coach, he won two SEC Championships and a national title. Under Moore, the LSU track & field team won 14 conference titles. In 1933, he led the track team to the SEC’s first NCAA National Championship. Coach Moore came to Birmingham in 1947 as only the second full-time Commissioner of the Southeastern Conference; he served in that position for 18 years. He received the Amos Alonzo Stagg Award in 1966 and is enshrined in the National Football Hall of Fame as well as the Tennessee, Georgia and Louisiana Sports Halls of Fame.