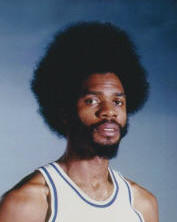 Artis Gilmore played high school basketball at Dothan’s Carver High School. He led Jacksonville University to the 1970 NCAA Championship game. He is one of only five players in NCAA history to average at least 20 points and 20 rebounds in his career. His career average of 22.7 rebounds per game is still the highest in NCAA Division I history. He was drafted by the Kentucky Colonels of the ABA in 1971 and earned the rare distinction of being selected both Rookie of the Year and the League MVP. He led the Kentucky Colonels to the ABA Championship in 1975. He was a six-time NBA All-Star, scored 24,941 points during his career in both the ABA and NBA, and had a total of 3,178 blocked shots. He is a member of the Naismith Memorial Basketball Hall of Fame Class of 2011.