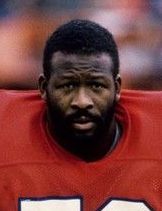 Tippett played collegiately at the University of Iowa where he was an All-Big Ten selection for two consecutive years. He was voted to Iowa’s All-Time Football Team at defensive end in 1989. He is a member of the University of Iowa’s Varsity Hall of Fame. He was selected in the second round of the 1982 NFL Draft by the New England Patriots, where he played his entire career. He was a five-time Pro-Bowl selection and was selected to the NFL’s All-Decade Team of the 1980’s. NFL Players Association voted him AFC Linebacker of Year for three consecutive years. He was selected to the Patriots 35th Anniversary Team in 1994; and their Team of the Century in 2000. He was elected to the Pro Football Hall of Fame in 2008.