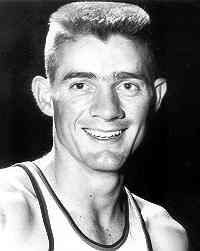 Frederick played basketball collegiately at Auburn. As a junior, he set the single-season rebounding record with 325 and also set the AU single-game rebounding mark with 27. When he graduated from Auburn, he ranked as Auburn’s third best rebounder with 904, averaging 14.3 for a career. He averaged 14.9 points a game for his career and had a career total 937 points. He was chosen All-SEC two consecutive years from 1958-59 and was voted to the Associated Press and Helms All-American teams his senior year. In 1959, he was voted SEC Defensive Player of the Year. He also was All-SEC in baseball and led Auburn to a SEC Championship. He is a member of Auburn’s Basketball Hall of Fame and has been inducted into the Tiger Trail. He started the basketball program at the University of South Alabama in 1966.