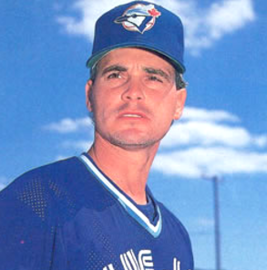 Jimmy Key played collegiately at Clemson University from 1980-82 where he compiled a 20-14 record. He is the only baseball player in Clemson history to be First Team All-ACC at two positions in the same season, as a pitcher and designated hitter. He was drafted in the third round of the 1982 MLB Draft by the Toronto Blue Jays. Set a club record for a rookie with ten saves. He holds the record for most wins by a lefty in Blue Jays history (116). In 1993, he signed a free agent contract with the New York Yankees and posted his best record, 18-6, with a 3.00 ERA. He won game six in two different World Series, both against the Atlanta Braves (1992 and 1996). He was voted to the All-Star Game four times. Named the Sporting News Pitcher of the Year twice (1987 and 1994).