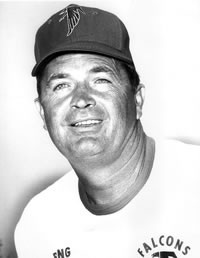 HAL MORELAND HERRING | Born February 24, 1924 in Lanett, AL. He played collegiately at Auburn University where he played center, quarterback, fullback and linebacker. He received All-SEC honors and the Most Valuable Player award in 1948. He started his professional career with the Buffalo Bills in 1949. He also played for the Cleveland Browns where he was defensive captain and played linebacker, leading the team to the NFL championship in 1950 and runner-up finishes in 1951 and 1952. After retiring from pro football, he returned to Auburn as a defensive coach and was promoted to defensive coordinator (1953-1965). He was awarded the All-American Football Foundation Lifetime Achievement Award for outstanding performance by an assistant coach.