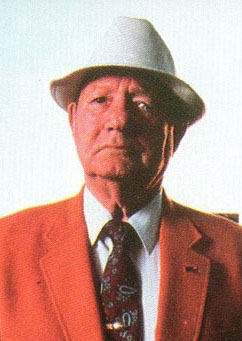 Frank Howard graduated from Murphy High School in 1927 and went to the University of Alabama on an academic scholarship. Howard earned three varsity letters in football and baseball. He was a track coach and assistant football coach at Clemson University from 1931 to 1939. In 1940, Howard was named head football coach and would remain in that position until 1969. Over the next 30 seasons he compiled a record of 165-118-12, took Clemson to the Sugar, Orange, and Gator Bowl, and recorded an undefeated season in 1948. His teams won eight conference championships and he was named ACC Coach of the Year twice. He also served as athletic director while head coach and retired from that position in 1971. He was inducted into the College Football Hall of Fame in 1989.