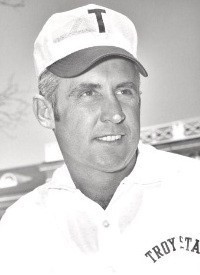 Atkins played collegiately for Auburn University. He was the Most Valuable Player on Auburn’s 1957 National Championship Team. During the 1957 season, he scored 83 points (11 touchdowns), which led the SEC in scoring and ranked him third in the country. The San Francisco 49ers drafted Atkins in 1958, and he also played for the Buffalo Bills in the AFC. On January 8, 1966, he was named Head Football Coach at Troy State. In 1968, they won the National Championship and he was named NAIA Coach of the Year. He coached professionally for the Buffalo Bills, Detroit Lions, San Francisco 49ers, and the St. Louis Cardinals.